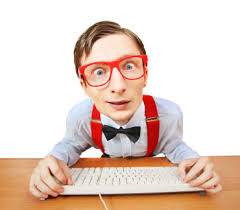 That’s a typical stereotype of autism. Male. Introverted. Loner. Geek. Wimp. Math, music, or computer savant. Abnormal. Weird. Mute. Even emotionless. And so the list goes on. For the autistic, that really hurts to be called wimp, though a lot may be proud of being geek, but for most I think are indifferent to this. I really don’t have an idea but I think that stereotype is absurd as it overgeneralizes the whole autistic population. Now, let’s break this myth of geekiness, autism version.

Not all of these traits are present in autism.

First, autism also affects females, though not as common as males (maybe I’ll write a post about why neurodevelopmental disorders affect males more than females). The male-female ratio is 4:1.[1][2] However, females may go underdiagnosed because of its stereotypical association with males. Dr Judith Gould, director of the Lorna Wing Centre for Autism, challenges this long-held view. She argues that girls on the spectrum are slipping through the net.[2]

“There is definitely a gender bias towards boys when it comes to diagnosis.”

Why is like that? It’s because girls on the spectrum are not easily diagnosed in primary school years. Autistic boys have more pronounced symptoms like getting violent and disruptive. Girls, on the other hand, are not obvious in behavioral problems. In fact, although communication amd social skills are nil, they can follow social actions by delayed imitation because they observe other children and copy them[3], masking autism. To make the story short, autistic girls differ from autistic boys, well, the reason is obvious, they’re girls.

The other reason autism is biased toward males is the autism theory of “extreme male brain” where systematizing things are more ‘male’ than ‘female’ in nature. This theory was derived from Empathizing-Systematizing Theory (E-S Theory)[4] where males are good at systematizing (having narrow interests and highly repetitive behaviors, also called ‘resistance to change or need for sameness’) and also low score on empathizing (understanding feelings of oneself and others). University of Cambridge professor Simon Baron-Cohen and colleagues then linked the E-S theory to the prevalence of these traits in autism and its association with males.[5] Nevertheless, this theory has been questioned because it overlooks females in the spectrum.

Second, being autistic doesn’t necessarily mean genius or extremely intelligent. Autism is a spectrum of disorders ranging from high-functioning to low-functioning. That means autists have different intelligence levels.

Some of them are with high IQs (high functioning autism or HFA). They’re exceptional, usually in logical studies like mathematics, science, and computer studies, and abstract reasoning as well. Some are savants in music, though mostly classical. Usually, they can finish college or even doctoral degrees and can have good employment given they choose jobs in these areas. But that’s not all. Unfortunately, there are also autists with low IQs (low-functioning autism or classic autism). They’re completely dependent on others for daily living. Some of them cannot talk even they have developed hearing and speech and focused on their inner world rather than outside.

Unfortunately, both HFAs and classic autistics are discriminated by the neurotypical community, particularly in the social field. Just because they cannot comprehend the social world doesn’t necessarily mean they aren’t interested in the social arena. For them, it’s comparable to the dyslexic who cannot comprehend letters. This breaks the autistic stereotype of being a loner. Though some are asexual (having no romantic/sexual interest with another person) and/or introverted, some want to have a relationship and to have friends.

Third, having autism doesn’t necessarily mean weird. As I said in my autism article (see my article on autism here) they usually have repetitive behaviors like rocking, stacking up objects, etc. This is the way they cope with everyday life.[6] This is nothing different from a neurotypical watching TV when unwinding. But not all autistics stay like that. Stacking up objects may gave way to more mature interests like i.e. collecting stamps or becoming expert at astronomy facts. These interests may not be socially desirable for the majority of neurotypicals, that’s why they become more socially isolated.

But wait. Don’t generalize right away. As for female autists, their interests are the same with neurotypical girls like princesses, dolls, fairies, etc., but are usually more intense and may seem not to outgrow these interests into adulthood.

Fourth, not all are mute. Some autistics can talk, although their language development is late and they talk literally, like they cannot understand figures of speech and nonverbal communication. But still, some are able to speak.

Lastly, they are not emotionless like what most people think. They can feel emotions like us. From fear, sadness, joy, even pain, they have feelings. And they have affection too even if they find it haed to express themselves. They don’t have to say their feelings like what pickup artists do. They just so it like hugging a parent.

Being mocked by other people is painful to the autistic.

Next time you plan to stereotype an autistic, think again. Maybe you are stereotyped too, but as a bully or mean person.

Not all autistics are the same. They’re individuals like us.